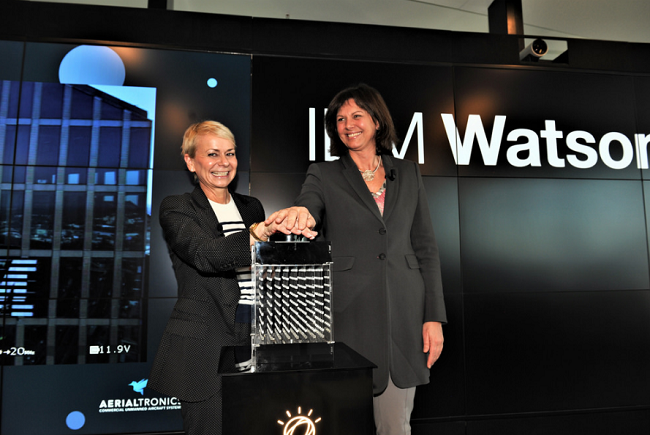 IBM has announced a major ecosystem initiative to drive collaborative innovation with dozens of clients and partners as it opens the doors of its new $200M global headquarters for its Watson Internet of Things (IoT) business in Munich, Germany. In the first ever cognitive collaboratories, Avnet, BNP Paribas, Capgemini and Tech Mahindra will collocate development teams at the IBM center which will also act as an innovation space for the European IoT standards organization EEBus.

Late last year IBM announced that car maker BMW will collocate part of its research and development operations at IBM’s new Watson IoT center to help reimagine the driving experience. Now, IBM is announcing four more companies that have signed up to join its special industry “collaboratories” where clients and partners work together with IBM’s 1,000 Munich-based IoT experts to tap into the latest design thinking and push the boundaries of what is possible with IoT:

“There is no limit to how IOT can be used to improve the world. We’re already seeing tremendous potential in the new IOT applications that we’re developing with our customers, which range from protecting our children to preventing Legionnaires’ disease,” said Patrick Zammit, Global President, Avnet Technology Solutions. “Avnet’s latest collaboration with IBM will accelerate our ability to provide customers with the foundation they need to rapidly develop marketable IOT solutions.”

“BNP Paribas, via Consorsbank, its retail digital bank in Germany, is very happy to partner with IBM´s new Watson IoT Center”, said Kai Friedrich, CEO of the Consorsbank business. “We will collocate a team of solution architects, developers and business development personnel at IBM’s Watson IoT Center. Together with IBM’s experts, they will explore how IoT and cognitive technologies can drive transformation in the banking industry and help innovate new financial products and services such as investment advice.”

Global IT consulting and technology services provider Capgemini will collocate a team of cognitive IoT experts at IBM’s Watson IoT center. Together they will help customers maximize the potential of Industry 4.0 and develop and take to market sector-specific cognitive IoT solutions. Capgemini plans a close link between its Munich Applied Innovation Exchange and IBM’s new Customer Experience zones to collaborate with clients in an interactive environment.

“We decided to collocate Capgemini’s technical and business development experts alongside IBM’s in order to forge an even deeper relationship between two companies that will accelerate the digital transformation of our clients. Our people and clients will have full access to IBM’s technologies, experts and resources, thereby significantly shortening the time to market”, said Fernando Alvarez, Corporate Vice President and Global Head of Strategic Initiatives and Partnerships.

One company already benefitting from this close collaboration is Faurecia – one of the world’s largest international automotive parts manufacturers which has adopted new joint predictive maintenance solutions from IBM and Capgemini in order to increase the efficiency and reliability of its manufacturing operations.

Indian multinational provider of enterprise and communications IT and networking technology Tech Mahindra, is one of IBM’s Global System Integrators with over 3,000 specialists focussed on IBM technology around the world. The company will locate a team of 6 developers and engineers within the Watson IoT HQ to help deliver on Tech Mahindra’s vision of generating substantial new revenue based on IBM’s Watson IoT platform. Tech Mahindra will use the center to co-create and showcase new solutions based on IBM’s Watson IoT platform especially for Industry 4.0 and Manufacturing, Precision Farming, Healthcare, Insurance and Banking and automotive.

“IBM is a key partner in for our IoT strategy. By collocating in IBM’s Watson IoT Center, we will not only co-create new solutions and services, but will ensure our proximity to key European clients especially around Industry 4.0 and Manufacturing,” said Vikram Nair, President Tech Mahindra EMEA.

Breathing Life into the Connected Home and Vehicles with EEBus

IBM has announced that as part of its new membership to EEBus (Europe’s leading IoT alliance initiated by the German Government) it will provide the organization with an Innovation Space within its new Watson IoT Center. This space will be used to imagine, build and showcase solutions that combine IoT technologies and open standards. The EEBus Initiative has over 60 members who are leading stakeholders in the Connected Home including Bosch, ABB, SMA, Miele, Schneider and Vaillant as well as the major European automotive brands. Members of the EEBus Initiative collaborate in various working groups to establish a standardized and common language for the interoperability of connected devices. Smart Heating, electrical vehicles, photovoltaic systems and other appliances can thus communicate seamlessly about energy management and usability.

“Joining the innovation space within IBM’s Watson IoT-Center gives the EEBus Initiative the ability to accelerate the development of its global cross-industry network and enlarge its reach,” said Peter Kellendonk, 1th Chairman of the non-profit organisation. “We are convinced, that the smart use of energy will be one of the major use cases in the future development of the IoT.”